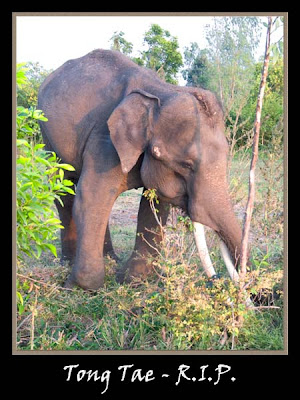 This is the first of a few articles I will post about my trip to the elephant round-up in Surin. One of the recurring blessings in my life is the opportunity to spend time in the company of Sangduen “Lek” Chailert, the founder of the Save Elephant Foundation and the Elephant Nature Park.  She is one of my spiritual teachers; I learn from watching as opposed to listening.   (Gentle reader, if it looks like I’m still in Thanksgiving mode, deal with it).
﻿ One of the reasons we went to Surin was to rescue at least one elephant.  Look for an article soon about Kwan Jai and Jack.  She was rescued and is happy and safe at the ENP.   Scouts for Lek went to Surin and looked for Elephants to rescue.  One candidate was Tong Tae, a beautiful tusker, only 20 years of age, who had been horribly abused and who was very ill.   People warned me not to get too close because he’s a bull and might charge.  The truth is that he didn’t even have the energy to hold up his own head.


﻿﻿Both the vet and Lek told us that Tong Tae was too ill to make the trip back to Chiang Mai.  Also, it appeared that he had Elephant Herpes which is highly contagious; he would put the entire herd at risk.   The truth is they can’t all be saved, but as Antoinette so eloquently states:  it’s one elephant at a time.   Yesterday I received an email for Lek telling me that Tong Tae has passed.   I have tried for most of this morning to incorporate her thoughts and feelings in this article; I have failed, badly in fact.   I do want to share with you a few of my thoughts.
a.  Tong Tae was one of God’s creatures who endured a life of torture at the hands of humans.  Humans who come from a culture that is supposed to revere the elephant.  Something is very wrong with this picture.
b.  His remains were sold for a substantial amount of money.  The ivory will be valuable.  Personally I would have no problem with ivory taken from a deceased elephant, but the truth is that elephants are killed and maimed for their ivory every day.   When you see ivory for sale, ask what sacrifice the elephant made.

c.  The Elephant Herpes in Surin is an epidemic!  It could endanger the entire elephant population in Thailand.  Frankly, had this been in most other places the elephant roundup might have been cancelled for this year.


d.  The Asian Elephant, like it’s African cousin in serious trouble.  If these marvelous creatures are to survive we must do all we can to help them.  I truly believe that education is the key.   Surin is an ideal place to concentrate education efforts; lots of elephants and more than enough abuse.  Perhaps the Surin province could include required education and a certain amount of monitoring in their "Take me Home" project?
﻿﻿﻿﻿﻿ ﻿﻿﻿﻿﻿
﻿﻿
Posted by Jerry Nelson at 1:49 PM