The Animal Activist Alliance is Alive!

"The greatness of a nation can be judged by the way its animals are treated". Since Mahatama Ghandi is the one who made that statement I'll accept it as truth.  An alliance of animal lovers has been formed here in Thailand.  The vast majority of their membership and their leadership is Thai; a few foreigners have been allowed to join and participate. I hope they will consider me a member.

This new organization is called  Animal Activist Alliance (AAA) Thailand.  They are bent on improving Thailand's status in the world by improving the way animals are treated in this great nation. I stand with them. 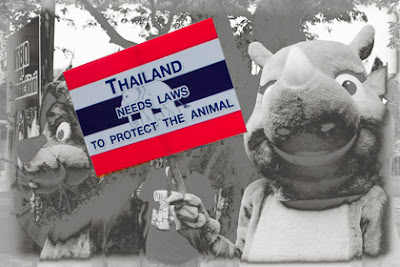 Mahatama Ghandi also said "Even if you are a minority of one, the truth is still the truth".  Well gentle reader AAA held it's first official activity today (April 5, 2012) and from what I saw they had between 200 and 300 in attendance.  In my opinion they speak the truth.  Their first activity was a quiet protest held outside Gate #3 of The parliament, ironically the gate is across the street from a zoo.  The demonstration was well organized, and well covered by the press.  Symbolism, and signs were the order of the day.  The crowd was well behaved; there were no blaring loudspeakers.

Very Important Addition:  On 11 April,  AAA released an 11 minute video which does an excellent job of explaining the aims of the alliance, the activities of the day and the wonderful reception by the Thai Parliament.  It's in Thai, except for a few short interviews in English.  Watch it anyway, it's really well done.  The version with English sub-titles is finished!  Please see:


Their press release stated that "The AAA is a newly formed alliance in Thailand with the objective of pushing for animal protection laws in Thailand, the introduction of animal rights and the stop to animal torture.  The Alliance currently has more than 30 member groups and organizations....."
The press release also listed the main objectives for the demonstration as:
"1.  To show the concern of the Thai People for the lives of animals and their wellbeing in Thailand, whit handing over a petition with 10,000 signatures for a law proposal to parliament.
"2.  To inform and educate the Thai public on animal welfare issues and to ask for more public support.

"3.  To present evidence of animal torture that has been kept secret until this day. 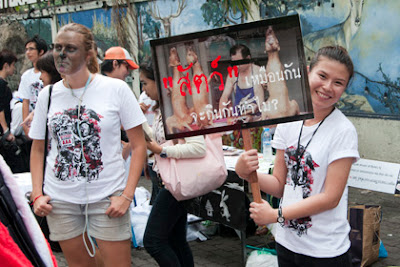 "4. To show the international media and public that Thai citizen do care about animal wellbeing and animal rights.

Below is a link that, in my mind proves that the Thai media has taken this seriously and now the whole world will know about the butchery of innocent dogs!  It will stop, I'm sure!
Bangkok Channel 3 News Clip

The clip below is from Channel 3 News interview of AAA members during the evening news on April 5.


"5.  To make government and the citizen of Thailand understand the problems animals in Thailand face and to present a solution in the form of animal welfare laws presented by several popular Thai celebrities".
There have been unrelated tragedies in Thailand of late that tell me the time has come for the Animal Activist Alliance (AAA) Thailand. Animal confiscations and the politics involved have taken a huge share of Thai media time lately. The story of the dog meat trade is causing revulsion in both the local community and the international media.  The Thai are a gentle people who will avoid conflict and always want to take the middle way. The AAA will, I hope, widen the middle way and make it possible for the law makers to consider passing laws that will protect animals in Thailand.  The April 5th demonstration was an excellent start!

Some of the feelings were best expressed by the signs people carried. 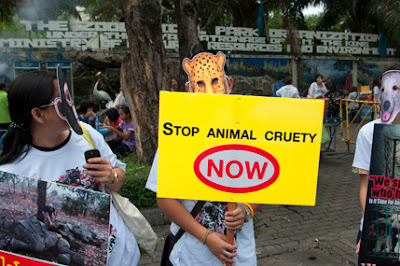 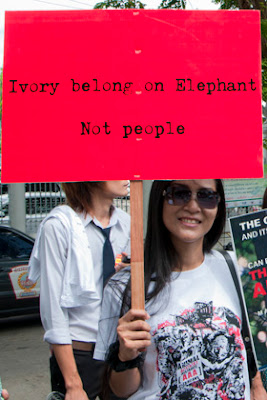 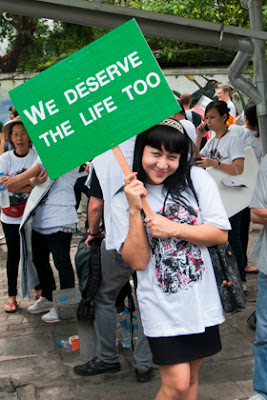 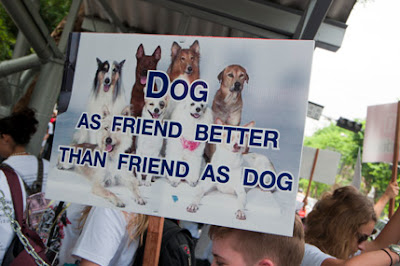 Both sides of the street were lined with AAA volunteers with signs, masks and costumes (at least until a labor group showed up with their huge loudspeakers which they aimed at the parliament building; at that point AAA retreated to the zoo side of the street).
Symbolism included cages, chains and at least one bull hook.

Please allow a brief look into my personal past and my personal views. Some years ago I had the honor of serving as a Court Appointed Special Advocate (CASA) in the dependency court system back in the States.  The CASA volunteer is appointed by the court to watch over the child as he or she is jostled by opposing sides in a legal battle that determines the child’s future.  At one point in my first case, the child’s father yelled at me – “Whose side are you on anyway”?   My calm answer – I’m on the side of the child.  Recently I have been asked by opposing sides of an issue with elephants the same question:  “Whose side am I on”?   Let me be very clear and very direct here.  I am on the side of the animals, especially the elephants. Period!


Change begins with you and with me.  Often, our choice of words make a big difference.  For me I will never again own a dog, cat or other living animal.   Rather, I will consider myself as their guardian.  Just that shift in vocabulary can have an impressive effect in how one behaves toward his or her animal.  For more on this see: The Guardian Campaign    One of the signs I saw yesterday brings this point home:: "Family not Grocery".
April 5 Demonstration Photos has a collection of my photographs from the first important activity by the Animal Activist Alliance (AAA) Thailand. Usually my articles include only my photographs; however the members of AAA have been posting a lot of great shots.  I thank my fellow members for making this a better article!  Hopefully I have the photo credits right!  I’m sure there will be follow up stories, but I have no idea when.

Posted by Jerry Nelson at 2:34 PM No comments: