“He’s / She’s too young to accomplish anything significant.” – BS!   Let me make my point, gentle reader. There is a young man 9 years of age and his name is Jack.  Jack came to the Elephant Nature Park some months ago.  He became great fans with Lilly, but that was just the beginning. One morning on a walk around the park Jack learned of an elephant that had been leased to the park but would soon be returned to her legal owner.  The elephant’s fate would be working the tourists in Bangkok. Jack was upset and decided to do something! By the time he left the park determined to rescue an elephant.  His parents patiently explained to him that it was too expensive, they simply couldn’t afford it.
By the time they were at the Bangkok Airport, Jack had convinced his parents to allow him to raise the funds necessary; again Jack is 9 years old!   By the time they had arrived at home in New Zealand, Jack had listed out the fund raising activities he would undertake. These included a kids motor cross and an internet based photo auction.  Jack’s least favorite was the auction because it was his least hands on project. Long story short Jack raised the money!   His favorite was the motor cross in which he rode.  Did I tell you he's 9 years old?
I met Jack in Chiang Mai and had the pleasure of being on the same van with him as we made the trip to Surin.  We arrived on the morning of the 18th, threw our bags in a room, had a bit of breakfast and set out to inspect elephants.  Four had been tentatively selected for resucue.   The first elephant we visited happens to be the one Jack rescued.  He chose Kwanjai (blessed one) for her new name, but I getting ahead of myself.
﻿
The 2nd elephant we visited turned out to be a bait and switch.  She wasn’t the elephant the ENF crew had noticed earlier.  This poor girl was very ill.  She was also in the company of a family who claimed to have owned her for all her life, but couldn’t even get her name strait.  The children, children are more apt to tell the truth in any culture, told us she was there for only a couple of days. Anyway, she was very ill and no one appreciated the cheap bait and switch attempt.
﻿ ﻿
﻿ ﻿
The 3rd elephant was secluded and had allegedly killed some 12 people in the South and 4 more after being moved to the Surin area.    Interestingly, Lek felt that if this elephant could be taken to the park and re-socialized with other elephants she just might be O.K.  There just wasn’t enough money to rescue two elephants.  When I asked Jack he simply said that they all deserved to be rescued.  Truer words have never been spoken. 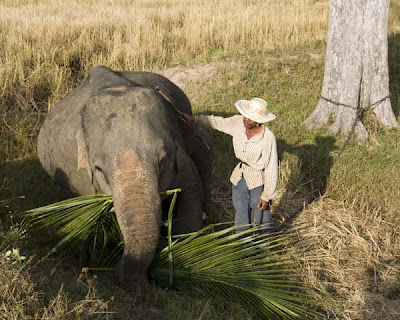 Pray for her!
The 4th elephant was Tong Tae, who as you know survived less than a week after we saw him.
Kwanjai is the name Jack chose for the elephant rescued through his effort.  Kwanjai means blessed.  When I asked Jack about the name he said that they were blessed by each other!  We cannot rescue them all, but Jack has proven that it’s possible to save them, “one elephant at a time”.
On the way to meet the truck we stopped in the market and bought food for her.   Any one who saw her would know she was hungry. 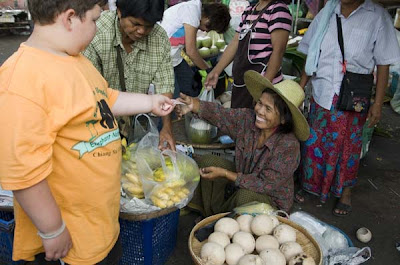 Jack buys fruit
On the afternoon of November 20, 2010 Kwanjai was loaded on the truck and began her journey to the park.  That girl climbed up on that truck like she knew full well it would take her to a better life.  People commented that she was one of the easiest elephants to load they had ever seen.  She obviously wanted to go.
﻿ ﻿
Her bad leg must have been bothering her and in an attempt to make herself more comfortable she broke one of the supporting poles very early on the morning of the 21st.   After a brief delay she was better secured and finished her trip without incident.   Jack stayed on the truck with Kwanjai all the way to the park, about a 22 hour journey.  He could have gotten into a van at any of the several stops, but would have nothing of the idea. 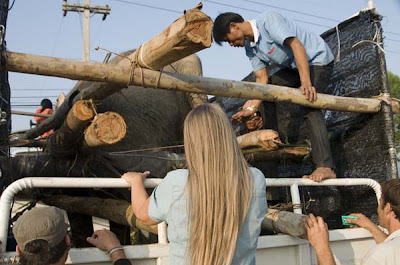 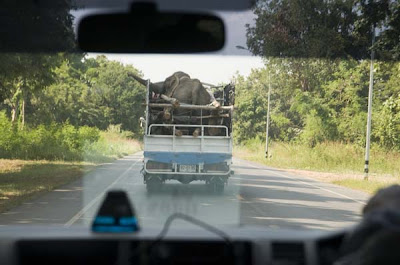 Chiang Mai bound
On the 19th I had the opportunity to hang out with Jack at the Elephant parade and buffet.  Jack is an amazing boy.  On one hand he has the maturity and courage to rescue an elephant and on the other hand he’s a very intelligent, but normal, little boy.  Jack wanted to use one of my cameras.  Yes but I want you in my line of sight at all times was my answer.  I gave him photo assignments and critiques; we had a great time.  Keeping up with an excited 9 year old is a challenge, especially in a street crowded with elephants, vendors and tourists.  At one point, I looked him in the eye and said “Jack you have a case of 9 year old ism”.  He smiled and agreed.  He stayed in line of sight for the rest of our time together!
Some of his photographs are really very good.  In fact, I can’t be positive who took some of them.  I know Jack took the one below.
Speaking of photographs, there are several more at http://s935.photobucket.com/albums/ad200/jnelson1944/Kwanjai_Jack/   Enjoy, just don’t steal!
As I write this, I’m in Chiang Rai hoping that Jack is still at the park when I return early next week.  In the meantime, I’ve another article or two to write.
Abundant Blessings,
Jerry
Posted by Jerry Nelson at 5:34 PM