Surin, the parade of elephants 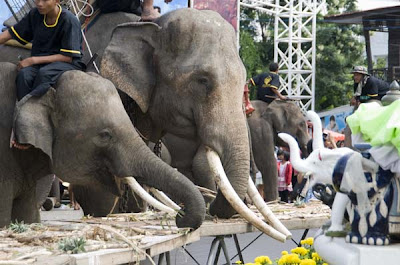 A parade, complete with marvelous floats and many elephants came through the streets of Surin.  At the end of the parade route is the famous elephant buffet, which was made short work of by these marvelous creatures.
Thailand is a land known for it’s contradictions.  The population is mostly Buddhist and any monk will tell you the first thing to know is that we should do no harm to any living creature.  The Thai elephant is a revered part of history.  The traditional Kwan Chang learned about the elephant from their fathers and grandfathers.  It was a most honorable profession and the people cared for their elephants for a life time.  True they subscribed to the brutal training methods, but at the end of the day proved loyal to their elephants.   Today it’s not the same.  Elephants are owned by business men and rented to young men and boys who appear to have no respect for the animals in their care. 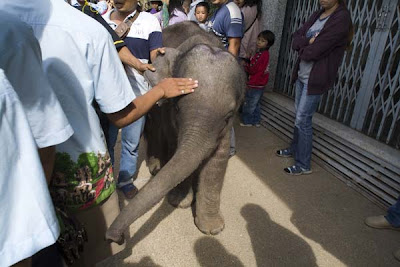 ﻿
I was told that street begging was banned in Surin during the festival.  Apparently the police didn’t get that memo.  It seemed that every baby elephant in Surin was on the streets, some of them on the sidewalks.
One of the first things I saw was a cute baby with a ribbon on her head.  On second look the ribbon was a vain attempt to disguise the abuse this baby is enduring.  The entire top of her head is inflamed with puncture wounds caused by the pick strikes.  The purple is mercurochrome actually.  The day of the parade and the next day we saw this poor baby and took many photographs.   The mahout even complained to the police that the foreigners were harassing him.  The police got a great laugh out of that one! 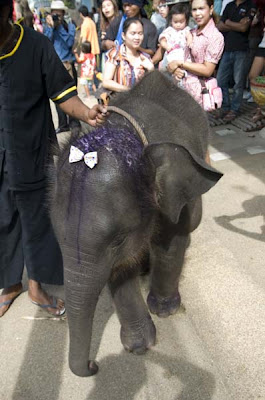 Ivory, hotly disputed because so many elephants have been butchered, was for sale everywhere.  I will grant you that no harm comes to a dead elephant when his tusks are used for jewelry.  Stealing tusks from live animals, maiming them in the process, killing the elephants because they provide beauty; these acts leave me aghast.  The Buddhist make medallions from gold, silver, wood and other materials.  I’ve seen them made of ivory in the past, and one could imagine a kwan chang having one made as a relic from an elephant who died.  Surin was the first time I was ever exposed to the sale of Buddhist medallions made from elephant hide!   From the same vendor I could have bought the end of an elephant tail!   Make your own choices, but rest assured no such things will ever darken my door! 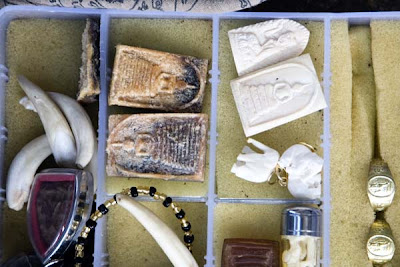 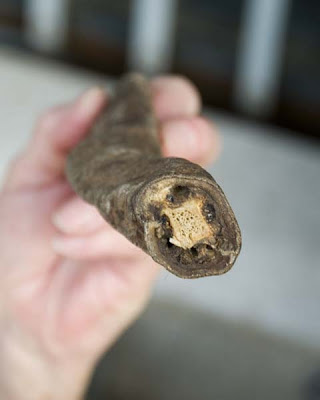 Yuk!
There were loudspeaker announcements in Thai and English.  As an American, I’m sorry to report that the English language voice was American and either he was reading a very poor script or is a dumb as ditch water.  One thing that he said was that elephants don’t have stomachs, just very long intestinal tracks and that’s why they have to eat so much.  Another statement he made was that elephants are loners and only because of the great talent of the mahouts could so many elephants be brought together.  Partial truths make good marketing, I would suppose.
Even I know that female elephants form family groups within the herd.  They are very social and very close knit.  Come up to the Elephant Nature Park and observe!  Each baby would have not only it’s mother, but aunties selected by the mother to protect her.  Here at the festival many of the babies were tethered to their mothers, others were separated.
Bull elephants tend to be loners but stay within close range of the herd.  Two bulls could definitely spell trouble.  I’d credit the lack of elephant fights in Surin more to the drugs they with which they were doped than to any great talent on behalf of the mahouts. While we are on the subject, I was told of at least one human death caused by elephant fights.  That didn’t make the tourist news, did it?
﻿﻿ ﻿ ﻿ 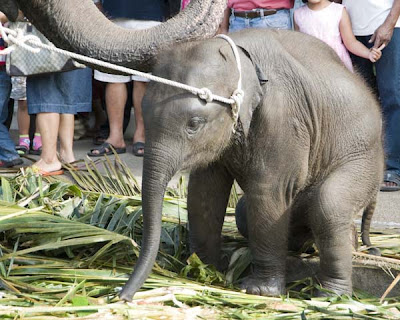 Frankly the whole Surin Elephant Roundup was more than just a bit too much.  It was the consolidation of much that we would like to change.  This morning I simply share a few observations, post some photographs and let you be the judge.   There are many more images at http://s935.photobucket.com/albums/ad200/jnelson1944/Surin_Parade_Buffet/
The parade was nice.  I like parades and next year may try for a better vantage point. 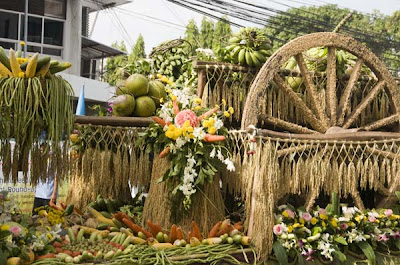 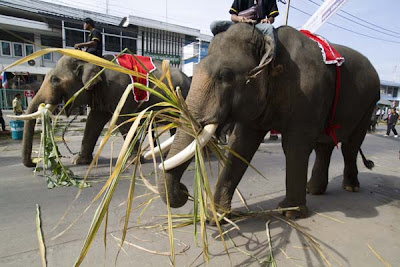 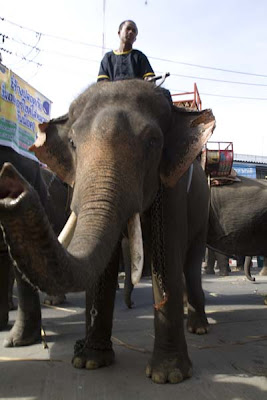 To be there on the street and witness so many elephants at one time is really awesome.  I can see why the tourists flock there. Who wouldn’t want to see a parade of elephants?
I wonder how many of the tourists had any idea what they were really witnessing.  I’ll close with a quote from Tony Nelson: “Never attribute to malice that which can be adequately explained by stupidity”.  One or our main goals is to educate; there much work still ahead.