Recently I had the opportunity to spend a few days in Sri Lanka.  Being me, I decided that I would have to check out the Pinnawala Elephant Orphanage.  I suspect that the trip advisor ratings say more about the tourist than the place they rate.  People who are animal activists and people who are learned about the plight of the Asian Elephant will not like what they find at Pinnawala.  People who are happy to see lot’s of elephants up close and just want to enjoy their vacation may enjoy Pinnawala.  Look at the trip advisor rankings as of November 1, 2012:  44 people found it excellent, 51 very good, 25 average, 13 poor and 38 rated it as terrible.  I will use material from this article for my own review. The terrible count will then be 39.

I have taken the liberty to cut and paste from a prominent Srilankan tourist information website:

The primary purpose of the orphanage has been to provide a lifeline to the orphaned baby elephants and adult elephants lost in the wilderness. In most of the occasions the mother of the orphaned baby elephants had been killed; and then there have been accidents of baby elephants falling into pits and losing out to the herd; and there were instances the mother elephant had fallen into a pit and died leaving the baby elephant lost in the jungle. There are instances of adult elephants being killed by farmers to protect their paddy fields and crops resulting in baby elephants orphaned”.
The Pinnawala Elephant Orphanage was launched to provide the best possible opportunity to the sad victims of such situations. The orphanage is fully geared to provide an environment of happy and healthy life to the beasts”

The elephants at the Pinnawala (Pinnawela) Elephant Orphanage aren’t subjected to any form of stress or threat at all and supported by a team of employees at the orphanage numbering over 100 including a group of mahouts.

The free movement of the herd within the 15-acre coconut grove of the orphanage affords the opportunities to both sexes of elephants to get together and mate. Maha Oya, the nearby river, where the elephants taken for bathing on daily basis played a dominant role in this regard. In 1984, the first baby elephant of Pinnawela was born. Today some of these orphans enjoy the good fortune of seeing their third generation too born at the orphanage. ……….”[1]


To the uninformed tourist this all sounds great.  But is it?   I think not. I took the time to do a little research and spoke to a couple of people before and after I visited this place.  I find contradictions especially with the claim that the elephants are free of any form of stress or threat.  Two different people told me they had seen an “elephant crush” -- the small cage used for the breaking of baby elephants -- on the property.  I was given conflicting direction to it’s location and managed to get myself caught in an area “not safe”. The staff told me it wasn’t safe, but the tone of their voices conveyed something I wouldn’t describe as concern for my safety.  I couldn't hep but notice the spears they were holding at port arms.  What else were they hiding?  Bottom line is I didn't get any pictures of the crush, but have every reason to believe the people who told me of it's existence.
One of the same sources told me a story about a pair very young baby elephants which were allegedly rescued from the jungle after their parent abandoned them. Humans abandon their young, elephants do not!   I would have loved to seen these babies, but as I said they were not available to me.

So, what did I see?   First there is this old bull who apparently spends his days on a very short chain standing around so the tourists can touch him.  (A tip is expected).  This old boy is blind; no I didn’t even ask how that happened.  His body is scarred and appears to have various sores.  This elephant is neither happy nor healthy.   May the casual tourist wake up.  This is not something you want to see or show your children.  The sight of this elephant had a grave effect on me.  Why, I don't know.  What I do know is that in addition to my usual anger I felt a deep sadness perhaps a clinical depression.  Was I picking up his vibrations?  Perhaps.  I do know that I'm still effected when I see his images. 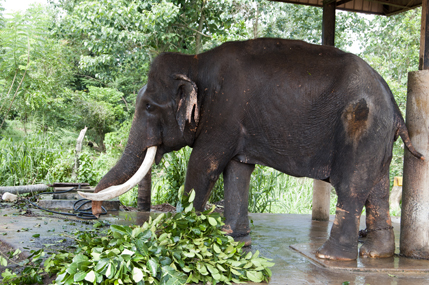 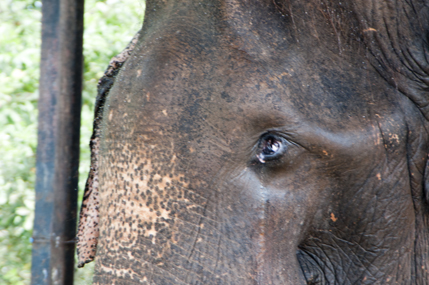 The breeding / rescue program seems to be working.  They do have a lot of elephants and many of them are young.  The website mentioned in the footnote talks about bottle feeding as a main tourist event.  To me that means they have a steady supply of infant elephants.   Gentle Reader, you decide if that’s a good thing or not.  I’ll keep my opinion toned down, other than to say I left there with a very heavy heart. 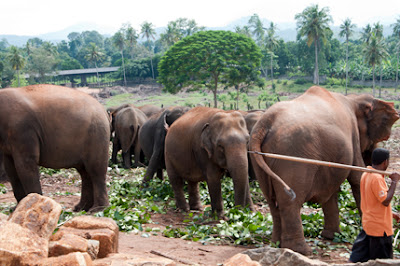 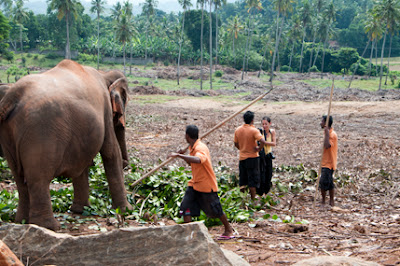 Many elephants seem to be seriously underweight.  Maybe they are sick, maybe not. 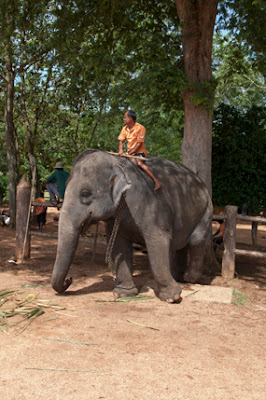 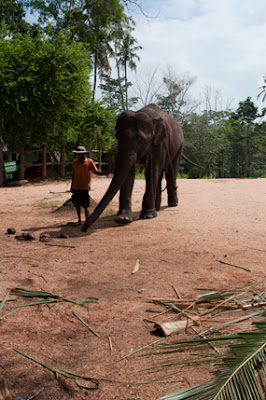 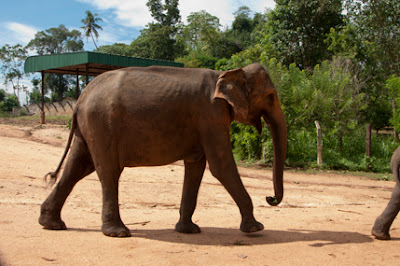 After leaving the orphanage we passed several elephant camps.  I saw one elephant that was in such bad shape that I asked the driver to stop, walked back and took this photograph.  I cannot understand why anyone would treat another living creature like this and I cannot understand why people would pay good money to be close to such terrible abuse!  Pathetic!

I’ll close with a positive note.  I’m told that there is work under way to establish another, hopefully better, elephant sanctuary in Sri Lanka.  The country does have a significant wild elephant population and apparently there are people in their government who are looking for better ways to care for their pachyderm population.

I have taken all my photographs, including the ones of elephants, from Sri Lanka and posted them on http://s935.photobucket.com/albums/ad200/jnelson1944/Sri_Lanka_201210/   There will be a couple of other articles about Sri Lanka which I will post in www.jerrynelsonjournal.blogspot.com  Look for them soon.


[1] http://www.lanka.com/sri-lanka/pinnawala-elephant-orphanage-in-sri-lanka-94.html
Posted by Jerry Nelson at 10:32 AM