Welcome to the new blog, Asian Elephant Stories.  I do hope you decide to follow along, just click the follow button on the right. I will promise to write the truth as I see it and will provide lots of photographs along the way.   This first posting is about the street elephants, chosen because you just might see one during your travels.

Many people will tell you that one of the charming things about Thailand is that when you visit you may have an opportunity to meet and feed an elephant on the streets of the town or city where you are staying. Yes, gentle reader it’s a touristy thing to do, but I’m here to tell you it’s just wrong on several levels. Towards the end of this article, I’ll try to explain why we are faced with this particular “tourist choice”. I encourage you to simply NOT participate. 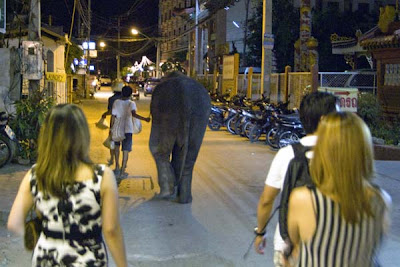 Just let them go, but do let me know where you saw an elephant.
First you may want to know that there was a law passed recently which not only forbids the mahouts from bringing their elephants into the city but authorizes a 10,000 THB fine and up to six months in prison for the mahout and a 10,000 THB fine for the tourist. (The law was written for Bangkok but could be applied to Chiang Mai and other cities as well). There is a history of laws prohibiting street elephants, but never before have the consequences been so severe. Will they be enforced, or is this just a political appeasement of who I wouldn’t know. Personally, I’m not taking a chance!

Second and most importantly, elephants simply do not belong on city streets. It’s dangerous for both the elephant and the tourists. Think about it. Here is an elephant in a crowded market and someone does something stupid like poking him. One swipe of the trunk and you have a very seriously injured person, who may or may not be the idiot who poked the elephant in the first place. There are other factors to consider: 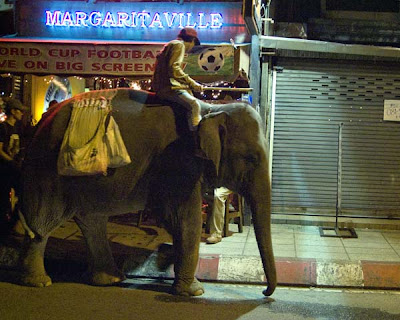 She walks the streets for hours!
a. Elephants have extremely sensitive feelers in their feet. They are designed to be able to detect movement of other animals in the forest. Can you imagine the sensory overload they suffer on city streets? The streets are often hollow, always extremely noisy and loaded with vibrations from trucks, cars, buses, tuk tuk and people. Imagine taking a huge stethoscope and putting it down on a city street and then piping the noise through amplifiers into your ears! Now crank the amps up all the way! 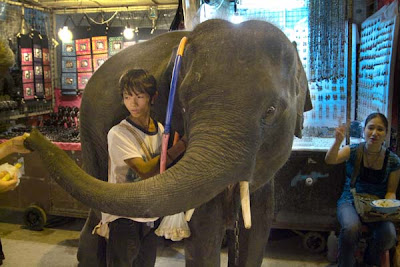 Young mahout and a young elephant, they are both overwhelmed.
b. These elephants are usually babies. They are smaller and cuter and easier to manage than adults. It’s just sad. 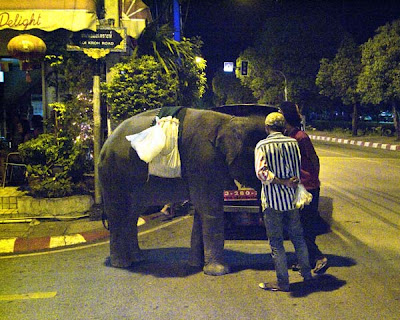 Not where she should be!
c. The mahouts usually keep their elephants outside the city. They often camp in trash dumps and other such locations. Sometimes the elephants have fresh water but often not. They almost always have insufficient food. Remember that a healthy elephant should eat about 10% of it’s body weight every day; that's a lot of food!
d. Elephants have frequently been the victims of traffic accidents, especially in Bangkok. At one point there was a law passed requiring elephants to be equipped with “tail lights”. They are often seen with them attached to their tails. I’m sure that helped, but not much. Elephants are grey and blend with the night. Several accidents have occurred when a bus or truck had “T-Boned” and elephant.
e. Feeding the elephants only encourages the illegal activity, and I can assure you the little bunch of bananas that the mahout sells you for 20 baht will end up in that elephants stomach with or without your contribution.
Many years ago, mahouts were invited to bring their elephants to Bangkok for some event or another. Since that day it’s been an easy way for mahouts to make a little extra money, if not a living. Hey there are documented stories of mahouts working the elephants all day and then causing them to beg on the streets most of the nights. It’s cruel but it happens.
Logging was banned in 1979. This was a good thing and a bad thing. Many elephants and their mahouts were out of work. The ban is often blamed for causing the street begging, but it was going on years before that. There is a lot more that can be written about this subject, but for now let me just suggest a couple of links (if you are interested, that is).
http://www.elephantnaturepark.org/news/0508a.htm
http://www.blesele.org/why-were-needed/street-elephants
http://www.bring-the-elephant-home.org/en/
The last time I was in Bangkok I was told by a couple of people that the elephants haven’t been coming into town since the last crackdown. I’m back in Bangkok the 1st part of September, let’s see. There may be another article on this subject in the next few weeks. In the meantime I’ll be posting articles about an elephant journey to freedom and the rescue of an elephant in Chiang Rai. Stay tuned, stay healthy and stay happy. 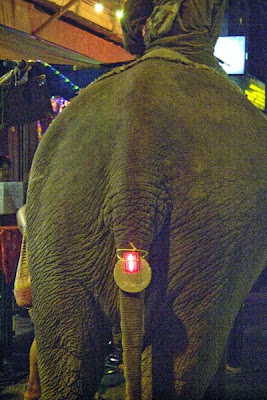 What can I say?
Abundant blessings,
Jerry
Posted by Jerry Nelson at 5:19 PM