There is a sister article on the jerrynelsonjournal but I’ll try to keep one writing just about the elephants.  Fair enough?  On Wednesday I went to the zoo in Chiang Mai with the purpose of seeing how the elephants are treated there.  There is a shuttle bus that you can take around the zoo.
The first stop is to see a magnificent bull elephant.  He happens to be in a small pen on the side of the road.  Zoo goers are allowed to feed him. You can purchase a small bowl of food for 20 baht.  The bowl consists of a few cucumbers and a piece of sugar cane.  This isn’t street begging, but it certainly leaves the uninitiated with the impression that it’s o.k.  If I can feed this elephant, why not the baby on the streets of Chiang Mai?    At least this one isn’t in danger of getting hit by a truck, but his life must be really boring!
The first thing I noticed about this elephant, his name is A Ka Sit and I’m told he’s 26 years old,  was is tusks.  They cross and are protected with some sort of padding.  I guess he’s safe from poachers there in the zoo.
The next thing I noticed, right next to where they sell the food to feed him is a display case of Ivory.  I don’t know about you, but that made my skin crawl.  I walked off and had to go back later just to get a snap shot (prove to myself what I’d seen). 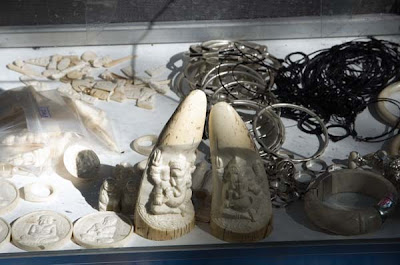 Ivory on display right next to the big tusker
﻿﻿﻿  The elephant habitat is small but seems to be well cared for.  It’s certainly clean.  I saw another bull and one cow.  This bulls tusks were also impressive.  The two are obviously friends.  I loved the moment when she placed her trunk between his tusks and snuggled with him.
The enclosure has a gazebo or sorts.  As I was leaving the bull went to it and rang the wooden bell; one of his elephant toys no doubt.  While these elephants seem to be healthy it was hard for me to stay and watch them longer than necessary to get the photos.  They are too confined and without much stimulation.
As the tour bus made it’s way toward the exit we came across elephant ride station.  Are these elephants kept with the two in enclosure?  I would hope there are at least two enclosures since there are definitely two bulls, but who knows.   Elephant rides are far from the worst that these creatures have to endure at the hands of mankind, but frankly I was surprised to see them at the Chiang Mai zoo.

On second thought after having seen the elephant feeding station and the ivory for sale, I really should not have been surprised at all.