Based on the length of their stay, one could argue that there are three categories of people who visit the Elephant Nature Park (ENP).  Third there are the people who volunteer to work at the park for a week or two.  Many of these fine people realize this is for them as a result of having visited the park for a shorter period of time.  Second there are the overnight guests. They enjoy more time at the park and can avail themselves to a morning walk to observe the elephants on the ground.  And first, there are the good people who go to ENP for a day trip.  I lovingly call them the “Day Trippers”.  Many of these people come back for an overnight visit and many return to volunteer for a week or more.  I myself was introduced to ENP by way of a day trip.  My life has never been the same from that day forward; much better, much fuller.

Two days ago I caught a ride to the ENP with the intention of hanging out and having lunch with a good friend.  However I was so inspired by the people who rode on the van that I just had to write this.  If you don’t know, a day trip to the ENP begins with being picked up at your hotel or guesthouse. I boarded at the ENP office and off we went to pick up the passengers. The driver made four stops and picked up people from five different countries:  Australia, Brazil, China, England and Israel.  This is the perfect group to accompany, photograph and write about.


I managed to cull the photographs down to only 37 and then posted them at http://s935.photobucket.com/albums/ad200/jnelson1944/ENP_20120927/  A special message to the group, if you want to print any of these please send me an email and I will give you a print size file. Please do not print from these internet size files. If you want to pay me for the photograph, don’t.  Instead please make a contribution to Save Elephant Foundation.

After picking up all the guests the van heads for the Elephant Nature Park, about an hour and a half journey. Our guide for the day was Bee.  I always enjoy her narratives and observations.  She’s truly a great guide.  By the way her real name is ผึ้ง (Pung) which is Thai for bee. On the way a video is played which introduces the guests to the plight of the Asian Elephant and to the Elephant Nature Park.


Once at the park we receive a brief safety briefing and an explanation of the days schedule, then it was off to see a few of the elephants.


About 11:30 we returned to the platform in time to help feed some of the elephants.  Many come to the platform and enjoy being fed a basket of fruit and veggies by the guests.  You might also want to know that not all of the elephants participate; some are still terrified of human contact (given their history, no one can blame them).


12:00 noon is human feeding time.  The lunch at the ENP is always a delicious vegetarian buffet. One day soon perhaps I’ll make a point of photographing some of the dishes. After lunch, around 1:00 pm the different groups are taken to the river and encouraged to help bathe some of the elephants.  Our group had a great time! 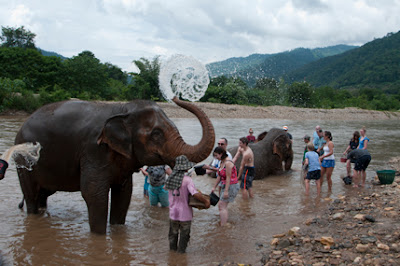 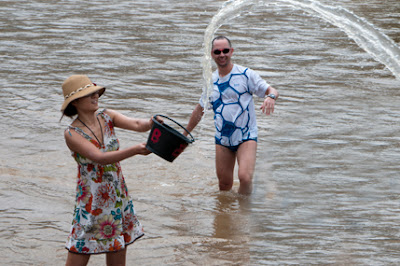 Somewhere in mid-afternoon the guests are asked to watch another video about the plight of the Asian Elephant.  This one explains the torture the elephants go through as the start of their training to become tourist attractions. I’ve heard complaints that it’s too hard to see, but I believe ENP is correct in showing it. One part of ENP’s mission is to educate.  Everyone is free to step out of the screening room at any time, as did my Australian friend the first day we went to the park.

The remaining hour or so is spent as free time.  Depending on the day and the weather, one might get another opportunity to get close to the elephants.  This day there was a torrential rain. The elephants didn’t mind, but the people stayed under cover.

Depending on the day everyone climbs back on the van between 4:30 and 5:00 and heads back to Chiang Mai.  Out of this group, at least one person has decided to return as a one week volunteer.  All in all it was a great day, one in which I made some new friends, caught up with an old one and was able to think through a few things that had been muddling around in my brain.

It’s time to clear the air.

Most of you know, but a few may not.  Let's get clear. Asian Elephant Stories is my independent effort.  The purpose of this blog has never changed from that which is stated on the header:  “A small effort to help these magnificent creatures regain their dignity”.  What I write here is not filtered or edited by anyone other than me.  I try to choose my words carefully, but not so carefully that the message is lost in political correctness.   I capitalize the entire phrase Asian Elephant to show respect; my late aunt Iza who was the Dean of English at Iowa State University would approve. Responsibility for errors, omissions and faux pas lay entirely with me.

This blog started this in August of 2010 with an article about street begging elephants. The street beggers have been gone from Chiang Mai for some time.  However,I recently heard that they have again been spotted in Chiang Mai province.  Sadly, there may be more on this subject in the near future.

I have to opportunity to do volunteer work, write for other publications and enjoy fairly easy access to captive elephants in Northern Thailand.  I say “fairly” because accessibility seems to be based on the elephant owner’s attitude toward candid journalism.  Although she is incredibly busy and often has to shuffle her attention between various media groups, Sangduen “Lek” Chialert always makes the media welcome.  Naturally, much has been written about Save Elephant Foundation and Elephant Nature Park (ENP).  I’ve written so much that some people think this blog is an extension of ENP. Wrong! Wrong! Wrong!   Yes I’m a fan. No I do not offer my blog as a marketing tool. This blog and Jerry Nelson’s Journal are independent expressions.
During a recent rather dark time in this wonderful countries history, I used this blog to re-transmit several articles written by others.  I make no apologies, but at the same time can take no credit for any actual contributions.  It’s time to get back to writing and in the future perhaps post more articles from other sources such as the tribute to Anthony Lawrence.

My next article might be “The Elephant Ambassador Program”.  I'm doing some research to ensure accuracy so don't expect anything for the next several days. I'm also beginning to gather more information on elephant street begging, the reported sightings keep coming in.  I truly wish there was nothing to report, but that just isn't reality.  Today's activity over on Jerry Nelson's Journal. is the posting of an article on the Symposium on Local Wisdom and Improving Quality of Life.  Check it out.

Posted by Jerry Nelson at 8:55 PM No comments: