Water for Elephants - Steeped in Manure

Below is the text of an article I recently wrote.  It was a bit critical of Reese Witherspoon and the cast for not taking some action when they found out some of the truths.   Today there is even more damning information in the media.   You might want to take a look at http://www.eonline.com/uberblog/the_awful_truth/b249724_alleged_treatment_of_reese_robs_water.html 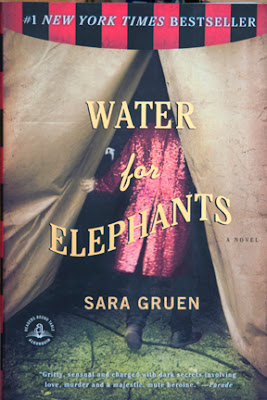 In 2006, Sara Gruen published her famous novel ‘Water for Elephants’. The writing is brilliant. She has a real gift for being able to describe a dark period in American history, the 1930’s. Her scene is a traveling circus and her characters are strong, believable, very well portrayed.  It’s obvious fiction based on excellent research.
It’s probably safe to say that there is nothing in her story that didn’t or at least could not have happened in the early 1930’s. She painted the picture of the traveling circus without really glorifying it.  She dabbled in just enough suspense and romance to make it a great read, though the romance was quite predictable and demanded a happy ending.  How that came about, I’ll leave you to read for yourself. The book neither endorses nor condemns the period; it does make it clear that these were desperate times in America.  Rosie the elephant is really not the central character that you might expect. She was significant, but not central.
The book climbed to the top of the ‘New York Times’ best seller list and received rave reviews from many acclaimed critics. A movie deal was a natural follow on. As I write, ‘Water for Elephants’ has returned to the number one spot; combined print and E-Book fiction. It’s been on the best seller list for 17 weeks!  An excellent review of the book written by Elizabeth Judd is currently available on the ‘New York Times’ website.
Ms Gruen wrote a good story and sold it for a lot of money.  Good on her. She sold the movie rights to 20th Century Fox for a lot more money, I’m sure.  Good for her.  These people know how to make money.
There are a ton of movie reviews online. Most of them are written by people who make a living saying nice things about mundane movies There are some reviews that seem to support the animal abuse.  “Elephants get poked. Get over it” wrote one reviewer who had nothing but good things to say about the movie. I decided to include my own review based on my own criteria.
The film industry will sell you the sizzle even if there isn’t a steak!  The movie has been hyped for months.  According to the gossip, the production costs for this movie was around US$36 - $38 million. Early predictions were that half of that would be recovered the first weekend it was available in theatres! Some of that money had to go to the rental of live animals, like Tia the Asian elephant that played Rosie in the film.
Animal lovers and advocates have been refusing to see this movie. There has been a lot of fuss about the treatment of the elephants, rumors that Ringling Brothers have been quietly backing the project (I would guess because its success would help bolster their sagging image).  So, how was the movie?
Just as I made a point of reading the book for this article, I also made a point of seeing the movie for myself. First, I think they did a good job with casting, but blew the chance to create a great movie due to poor script writing and weak directing. Witherspoon is known as a good actress, but her role in this movie was placid at best. There was no fire in her performance, I think because of a lack of direction. Robert Pattinson could have really earned his spurs here. What he was given he did well, but again there was a lack of chemistry both with his leading lady and with the elephant. The role of August was played by Christoph Waltz and is the strongest in the movie. A shame really because the role could have been terrific and secondly because other characters were treated so lightly. Was director Francis Lawrence trying to create something that would bode well for the circus industry, or is he just not a very good director?
This movie could have been great, but it missed on so many points. The characters of Camel and Kinko (Walter) were crucial to the novel but almost non-existent in the movie.  In fact none of the reviews I have read even mentioned them. They had great material from the book, from which they created a mediocre film. In the book there was a passing mention of Ringling Brothers who August hated because he was jealous. The movie managed to find space in their film to give Ringling 2 subtle plugs. Why? At least the music worked and the movie was well lit. The lighting was always good, and at a few points brilliant. You don’t have to see the movie to see the best lighting. It was used in several posters to advertise this film. Save your money and don’t support this film. 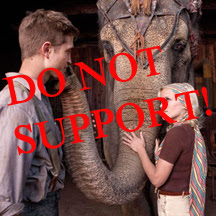 It’s a well known fact that Tai, the elephant that plays Rosie is owned by a company called Have Trunk Will Travel. Animal Defenders International (ADI) has released video showing abusive training in preparation for Tia’s work with the movie. When the video was released all the fanatics went nuts!  There were stories flying around the internet claiming that the stars of the show had been given electric shocks, anything to get a headline and attract attention. Some extremely shoddy journalism popped up on my screen over the past couple of months.
Serious animal advocates have concerns over ADI’s release of the video.  They were pummeled with two questions:  Why was the video so severely edited and why did they wait so long to release it.  After some time ADI posted explanations on their website.  I wonder.   Would 20th Century Fox have contracted with Have Trunks will Travel had they know how horribly Tai had been treated?  What do you think?   Big money or decency, which would they choose?
Is there anyone who seriously believes that 20th Century Fox with their army of lawyers, public relations and marketing people were totally ignorant of the training methods used to get this elephant, and I’m sure other animals, ready to perform for their movie cameras? Just because they are callous and greedy doesn’t mean they are blind.  If they are, then I suggest they be held to the old legal standard: ‘ignorance is no excuse’. These people spent well over US$35,000,000 on this project. They had to have peeked under the covers at least once!
Animal Defenders International says “The public, the stars and the filmmakers have been duped. This poor elephant was trained to do the very tricks you see in the film by being given electric shocks.” ADI is suggesting that Reese Witherspoon, Robert Pattison, Chistoph Waltz and the rest of the cast are actually that gullible. Further, it’s well known that animal advocates have been bombarding Withersoon and the others with the information.  They have suggested that the actors make public statements speaking out against cruelty. Some even suggested using their profits to help rescue Tai.  To my knowledge Witherspoon and her colleagues they have done nothing.  Now I ask, were they duped or were they complacent?
How can a company like Have Trunk Will Travel be permitted to operate in a state that claims to be progressive? The way they treat their animals is just wrong, and yet they seem to have a PR department that is well able to gloss over the facts.
The American Humane Society released a video promoting Water for Elephants, stating that none of the elephants were mis-treated. What a crock! Who paid whom how much to get that done? The really sad thing is that because the endorsement carried the name of the Humane Society, most people actually bought into it.  I certainly did on first brush.
There are rumors which I have been unable to substantiate, suggesting that Ringling Brothers is deep into this project; an attempt to increase the appeal of the circus world of 2011.  If the rumor is true it might explain a few of the direction choices made in the movie, if not we’ll have to chock it up as bad acting under bad direction. My hope is that this tack will not work. There are good reasons that Ringling has been sued for animal cruelty and many other things on multiple occasions. In the book, one of the characters described the 1931 edition of Ringling Brothers as “…..a real Sunday School Outfit”.  That is certainly not true in 2011.  Was it ever?
Circuses have always showcased humans at their silliest, often presented tragedy for enjoyment and historically been extremely cruel to their animals. Want to take your kids to a circus?  I’ll happily take my grandson to see Cirque Du Soleil.  The ones featuring animals are really steeped in manure!
Abundant Blessings,
Jerry Nelson
Posted by Jerry Nelson at 2:19 PM 1 comment:

Please click and read Freeing Thailand's Elephant, a news from UNESCO Bangkok
Posted by Jerry Nelson at 7:11 AM No comments:

I'm pleased, very pleased indeed to announce that Phyl Kirkland is my first guest writer for Asian Elephant Stories.  She has written a brilliant piece.  I added a few of my photographs, but Phyl is responsible for this great article.  Enjoy!!

Lek,
Posted by Jerry Nelson at 5:57 PM No comments: