His name is ArSee. It used to be a bit different but was changed because the old name sounded vulgar in English. Besides, many of the elephants at the park are given new names when they arrive. Some were traumatized to the point that they would have a bad reaction to the sound of their old name. The new name, to me, signifies a true new start for these magnificent creatures; something they deseve. 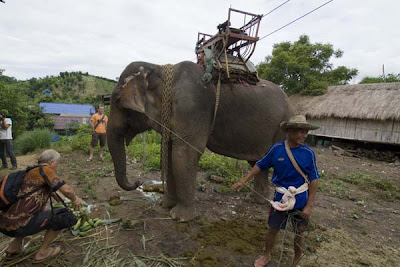 ArSee, as we found him
I had the distinct pleasure of accompanying the crew of staff and volunteers to Chiang Rai on July 31st. We went to a small trekking village just outside of town to pick up the newest member of the Elephant Nature Park family. On the way up we stopped at a market and bought and elephant size portion of fruit and vegetables, knowing that ArSee would need some food for his trip to the park. The next stop was at the edge of town where the purchase took place. 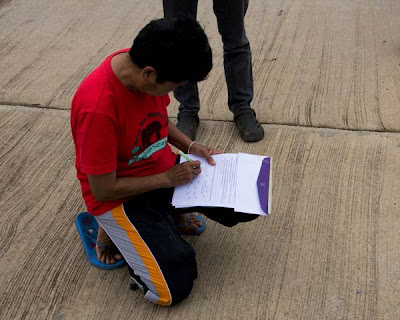 The contract is signed 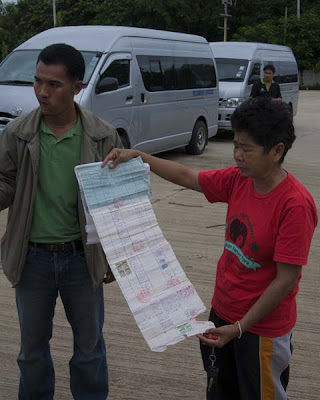 ArSee's registration papers / birth certificate if you will 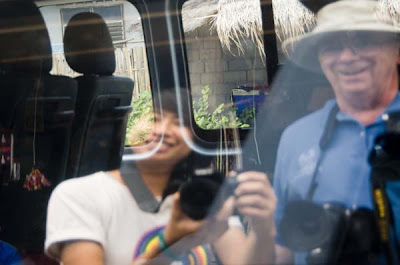 Camera Lek and Jerry
The shot was her idea and we both took one at the same time
We then went to the village to meet the elephant. I was really saddened by his condition, but at the same time delighted because I knew that from that day forth his life would only get better!  Remeber, in Thailand a domestic elephant has no rights under law.  Legally this icon of Thia history is livestock and the owner can do with him as he wishes.  ArSee is exactly why I love the ENF and the ENP. 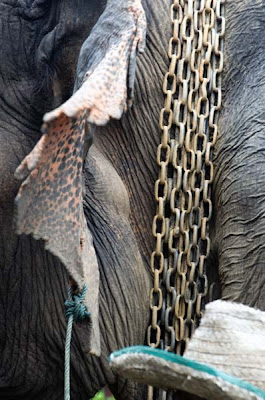 Chains and a rope through his ear; his everyday routine 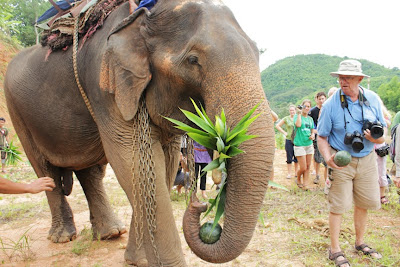 My first time to see ArSee (Photo by Camera Lek)
After spending several minutes feeding him and introducing ourselves we walked him down the road to a place where he could easily climb on the “jumbo express”.  I think I’ll suggest to the foundation that they paint the names of every elephant they rescue on the side of the truck. It would be sort of like notches on a gun handle only to mark the saving of lives. 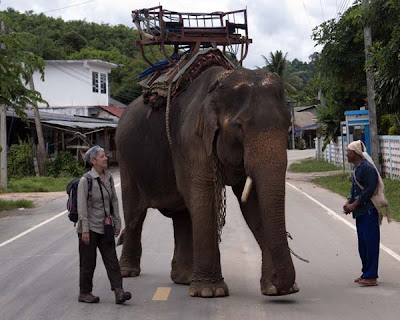 Mo and ArSee on the way to the truck
ArSee was an easy load. It took less than 15 minutes to encourage him to get on board. I’m told by the staff that sometimes it takes two or three hours to load an elephant on the truck. 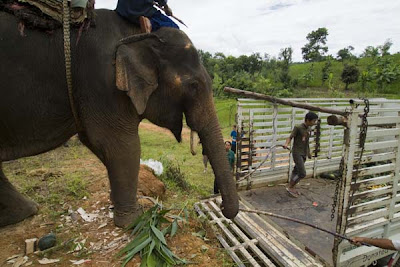 ArSee examines his ride
Once he was on board, they took off his basket. His chain came off too! 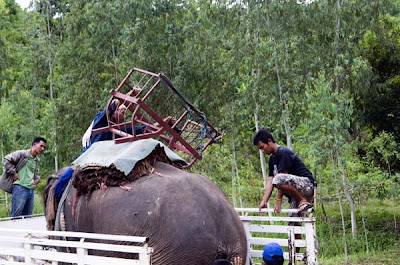 Off comes the basket 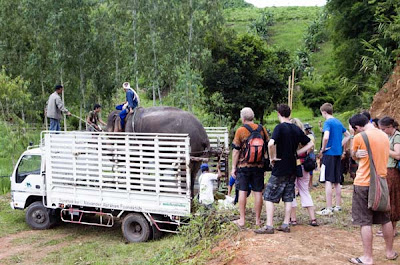 On Board!
The truck was loaded and ArSee secured for his ride to his new home. I jumped in the van and we headed back to Chiang Rai. Good luck! The driver chose a route back to the main road that took me directly in front of my house. I got out promising myself I would visit ArSee as often as I can, at least every month or two.
All the good photographs I took that day are on line at http://s935.photobucket.com/albums/ad200/jnelson1944/PhaiSiRescue/  Enjoy!
My first visit to ArSee was August 27th and 28th. He is currently isolated because of not being accustomed to all the other elephants, especially the bulls, and he’s in musk. Guess what? He has a girlfriend! Mae Lanna came charging, literally, across the field to be with him a couple hours before I went to see him.  The photo below says a lot! 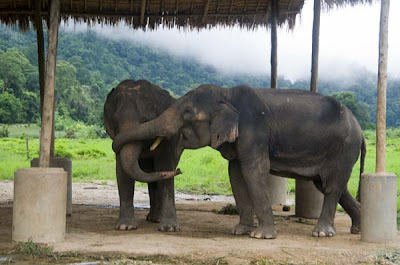 Mae Lanna and ArSee
More on this story next time, for now please don’t feel sorry for ArSee he’s in a great place. Do remember that it takes a lot of work and often a whole lot of money to rescue an elephant. They need your help!